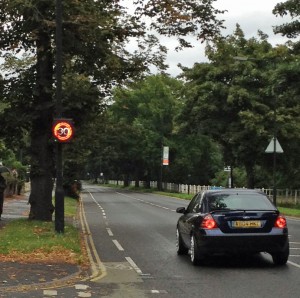 The York Council has claimed that the new vehicle activated speed sign on Tadcaster Road will flash on whenever a vehicle approaches it WHATEVER SPEED IT IS DOING.

The matrix sign has apparently been installed by the Fire and Rescue Service and, although identical in appearance to the type of sign fitted by the Council on streets like Moor Lane, it is triggered by any approaching vehicle.

From observations it would seem also to be sensitive to vehicles travelling away from the sign on the other side of the road.

While the intention is to remind drivers of the speed limit on the road (30 mph in the case of Tadcaster Road), it does seem likely to cause confusion in some driver’s minds.

Many will expect such signs to be triggered only by those travelling in excess of the speed limit (as happens on Moor Lane).

The sign is likely to be in place for about 2 weeks.