York’s new Community Stadium will not be ready for the 2016 rugby league season after it was revealed that the project has been delayed another 6 months. 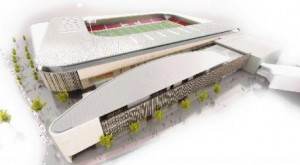 The stadium, which will be the new home of York FC and York City Knights, was originally due to be ready this year. But Labour-run City of York Council announced in January that it would not be operational until February 2016.

Now, in response to questions from the Liberal Democrat Group, Labour’s Cabinet Member in charge of the project has admitted that completion has been put back until July 2016. This is too late for the start of the 2016 rugby league season in March, and leaves just days to the start of the 2016/17 football season in August.

The stadium project has been beset with problems since planning permission was given in 2012. Not only is the project £450,000 over its original budget but there have been growing concerns that key decisions are being made behind-closed-doors after Labour abolished the cross-party Stadium Advisory Group.

Cllr Ian Cuthbertson, Liberal Democrat Spokesperson for Leisure, Culture and Tourism who challenged the Labour Cabinet Member over the delays at this month’s Full Council, commented:

“Labour inherited a great opportunity to deliver a Community Stadium ontime and onbudget, but their management of this project has been shambolic from the start. The stadium is now over two years behind schedule and it will end-up costing taxpayers far more than planned.

“It is also worrying that key decisions on the stadium and the current financial plans are being made behind-closed-doors and away from proper public scrutiny.”

To the Cabinet Member for Leisure, Culture and Tourism from Cllr Cuthbertson:

“What is the Cabinet Member’s deadline for starting work on the ground at the new Community Stadium at Huntington and what is her current best estimate of its opening date?”

“The current best estimate for the start of work at the new stadium is March 2015 with an estimated completion date of July 2016”.