More details of the changes to the Huntington Community Stadium project have emerged. The papers reveal the administration and project team costs for the project have increased from £3.5 million to £6 million. 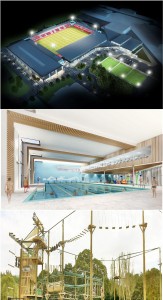 The Council will borrow a total of £8 million, meaning that local taxpayers will have to find £720,000 a year in debt charges. In addition the Council will contribute £323,000 towards the annual running costs.

The report talks about a developer paying £12 million for land on which to construct 6000 square metres of retail and commercial space.

This space would be used for

There are numerous risks identified for the project.

The land was originally acquired by the Ryedale Council for leisure purposes. There may be at least a chance that the original owners will seek a share of any enhanced value resulting from commercial development.

Equally the inclusion of – yet more – out of City centre retail development will be controversial.

This is the issue most likely to delay the granting of planning permission and could result in the application being “called in” by central government. In turn, this would impact on the target start (April 2015) and completion (July 2016) dates.

The Council don’t rule out a Judicial Review – a process initiated by opponents of change and which added, in the last decade, nearly 2 years to the timetable for modernising the Barbican auditorium.

Less obvious risks may arise. Not least the ubiquitous Great Crested Newts who mounted a strong resistance to being evicted from the neighbouring John Lewis site.

The report confirms that

GLL will be responsible for the overall management of the site and the direct management of the Community Hub, leisure facilities and associated assets. This will be controlled by an overarching lease and management contract for a 13 year period with a 5 year extension option.

As part of the procurement process, GLL have appointed York City Football Club (YCFC) as a sub-contractor to operate the stadium area. YCFC will work with CGC (York Racecourse hospitality company).

The proposal will involve changes to the existing parking and access arrangements. This will see the re-routing of Kathryn Avenue around the stadium, creating a pedestrian only and fan zone, strengthening links with the Vanguard retail scheme

The report also says that “All community hub tenants will enter into lease agreements with CYC for the use of the facilities. All leases have been set at appropriate commercial rates”.