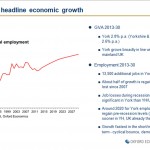 Those York Councillors who attended a briefing session last week on the Local Plan will have found out little new.

A study by Oxford economists suggest that as many as 13,000 new jobs could be created in the City over the next 15 years. However, about half of these will simply replace jobs which are being lost. 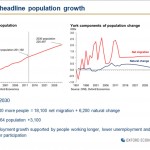 The same team says that there could be an additional 24,300 people wanting to live in York by 2030. This would generate a demand for about 450 additional homes per year (see figs 1 and 2 right).

The Council has finally admitted that 75% of the projected population growth can be attributed to immigration, rather than “providing affordable homes for York families” – the claim used by Labour to justify their “Big City” growth plans in the past. 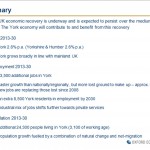 In summary (fig 3) the consultants conclude that the York economy should grow by around 2.8% on average each year.

The Local Plan agreed in February 2011 had agreed that around 550 additional homes were needed in the City each year. 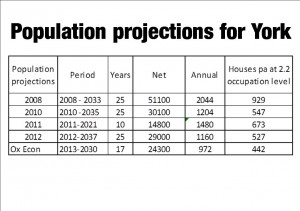 A second set of Consultants (ARUP) conceded that a straight projection of the 2011 estimates would produce an annual requirement for 638 homes pa.

They suggest that this should be increased to 838 to reflect an “assumed higher economic growth rate post 2021”.

It is this argument, about the level of economic growth that the City could sustain, that is likely to be the key area of debate as the Council moves forward to decide how many – and where – additional homes should be built.

If the lower figures are used then – taking into account an allowance for the large number of windfall opportunities which occur in York – it should be possible to produce a Plan which respects the City’s green field setting.

The other question which needs to be addressed honestly is whether the homes will actually be built?

Housing demand is increasing again following 5 years when house prices in the City have been stable. Over 5000 outstanding planning permissions currently exist but – partly as a result of the recession – house building levels have been sluggish (fig 4) 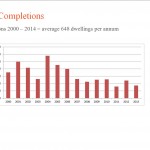 Some changes are likely with central government acting to remove the requirement for affordable housing quotas on developments of under 10 homes.

A review of the Councils policy on purchasing properties to rent on the open market is also overdue now with the recently announced 6 new (2 bedroomed) Council homes – scheduled to be built on a site on Pottery Lane* – apparently likely to cost over £170,000 each when site values are included.

There are dozens of modern 2 bedroomed property available on the open market for lower prices.

*Residents can view the plans for the Pottery Lane development on Thursday 11 December at St Wulstan’s Church, Fossway from 4pm – 6:30pm.

NB. The latest Council house waiting list figure for York show that it has reduced to 1348.