Yesterday’s York Council working group meeting should have sorted out a way forward which would have led to majority support for a new Local Plan for the City.

Instead a maverick Tory Councillor, Joe Watt, voted against his own parties policies when he sided with the “Big City” proposals which Labour have been touting around for the last 3 years. The high growth proposals were rejected at the October Council meeting having attracted a record number of objections from residents (over 15,000).

The latest proposals envisage an average of 926 additional homes being built in the City each year leading to a total build of 14,816 by 2030. The character and setting of the City would be changed for ever.

The majority of the houses would be built on Green Belt land and would be occupied by inward migrants. 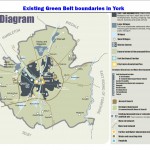 On average the City has seen – over the last 15 years – an average of just over 600 homes built each year.

Lack of planning permissions and identified development sites has rarely, if ever, been a problem during that period.

Over 80% of new homes have been provided on previously developed (brownfield) sites during the last 2 years.

The Council has been totally opaque in its dealings over the Local Plan. Even now Freedom of Information requests are subject to ongoing delays.

The York Council has also still to come up with a workable governance system which will see it through to the “all out” local elections in May.

We doubt that many existing Councillors will be re-elected if they don’t step up to the plate and respect the wishes of York residents. Cllr Watt, in particular, is leaving an unwelcome legacy with 4000 new homes now likely to be built on Green Belt land on the doorsteps of Skelton and Clifton Moor electors.

The Local Plan is the biggest remaining issue for the present Council to sort out.

It needs to find a consensus approach and quickly.