“Freedom of information” response reveals 24% more walked down Parliament Street in 2014 than in the previous year. 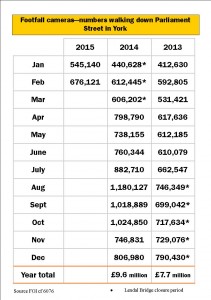 The number of visitors to the York City centre is now comparable with pre recession levels.

The area seems to have recovered from the reduction seen during the summer and autumn of 2013 when the Lendal bridge closure resulted in adverse publicity for the City across a wide part of the UK and indeed Europe.

The recovery seems to have extended into 2015 with 24% more pedestrian movements logged in January 2015 compared to 2014, with 10% more recorded during February

A complete day by day footfall monitor for cameras in Parliament Street, Coney Street, Church Street, Micklegate and Stonegate can be downloaded by clicking here. The latter 4 camera sites have been operating for less than a year, making comparisons difficult

Some caution should be used when looking at the footfall numbers.

The cameras may have been relocated in the past while special events and market stall locations, can “channel” greater or lesser numbers of people into range of the cameras.

The data is not of course a measure of how much people are spending in the City centre.