Dringhouses & Woodthorpe Lib Dem councillor Stephen Fenton has expressed concern at the submission of an application for a ‘scoping opinion’ on proposals to develop land off Moor Lane in Woodthorpe that has been earmarked as Green Belt.

The application refers to plans to build 500 homes on land adjacent to the Askham Bog nature reserve, along with a school, sports facilities, allotments and public open space. It is believed to be a precursor to a more detailed planning application being submitted. 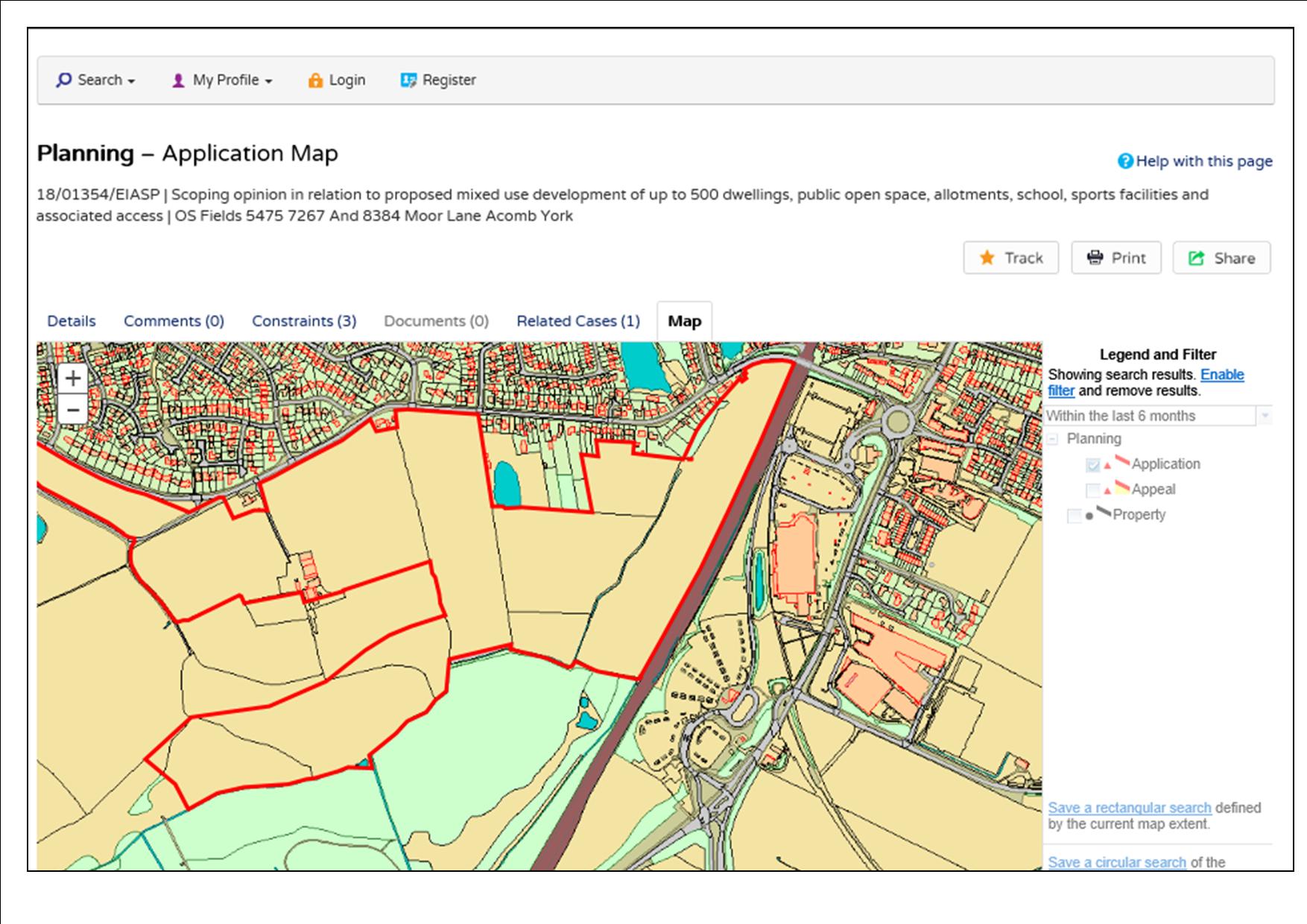 Developers have previously set out their desire to develop the site, most recently in 2016 when they published a brochure setting out an aspiration to build 1,250 homes:

Commenting on the new application, Cllr Fenton said “This application for land that has been earmarked as Green Belt is unwelcome, and will be resisted.

“Throughout the various stages of consultation on York’s Local Plan, residents and local councillors have been firm in their opposition to the development of this site, which is right next to the Askham Bog Site of Special Scientific Interest.”

Following the submission of York’s Local Plan to Government on 25 May 2018, Planning Inspectors have been appointed to conduct an examination as to whether the Plan is ‘sound.’

On 19 April the council’s Planning Committee approved the application by the Wilberforce Trust to build three three-storey blocks accommodating 30 apartments, and a two-storey office and community element, on its land to the east of St Leonards Hospice and The Square. 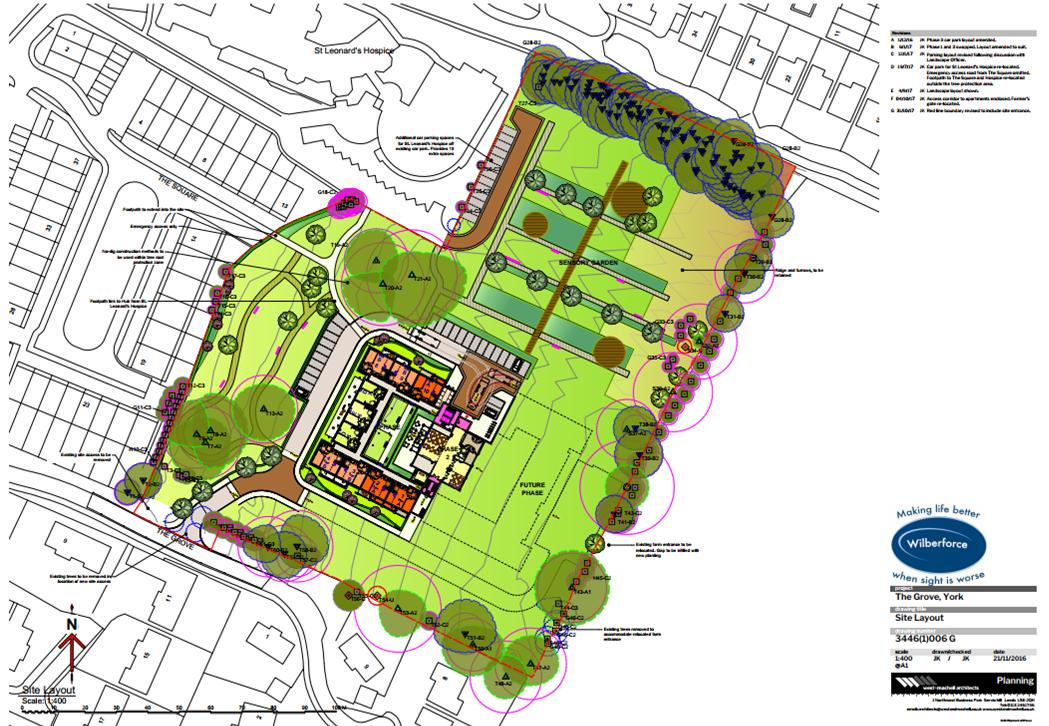 The full text of the decision, and conditions attached, will be made available in due course on the council website Here.

The council’s Planning Committee will meet on Thursday 19 April to decide on the application by the Wilberforce Trust to build three three-storey blocks accommodating 30 apartments, and a two-storey office and community element, on its land to the east of St Leonards Hospice and The Square.

The officer report recommends that the application is approved. The report is available on the council website Here. 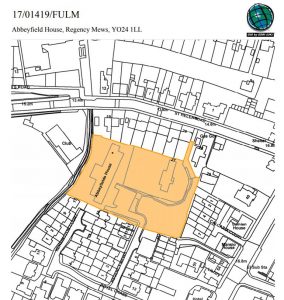 The proposal to extend the Abbeyfield House care home to include specialist 17 extra care flats and 8 dementia care units is being recommended for approval. The proposal involves the demolition of 27 St Helen’s Road.

Officials are set to shun the objections made by 57 residents, the ward planning panel and local Ward Councillors. The objectors raise a wide range of issues including inadequate parking provision, overlooking, drainage, scale, massing, impact on the nearby children’s nursery and loss of open space.

Residents can attend the planning meeting which will discuss the plans. It takes place on Thursday 11th January starting at 4:30pm

Details of the officers report can be read by clicking here

At a meeting of the council’s Executive on Wednesday 15th November councillors will be asked to approve a proposal that would see six two-bedroom council homes built on Chaloners Road in Dringhouses. The homes would be built on council land currently occupied by garages. 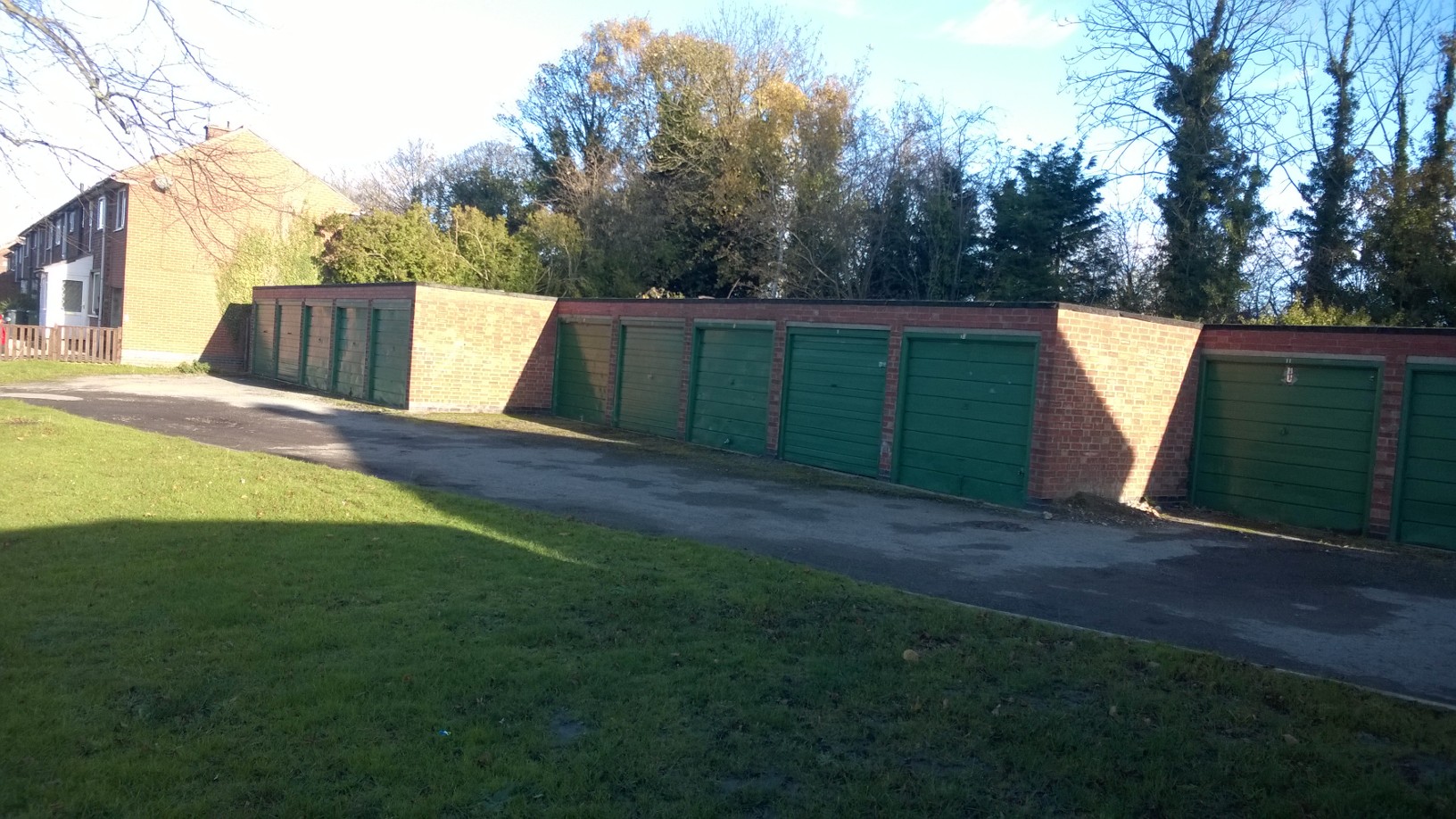 Planning approval for six apartments and two houses was granted for the site on Chaloners Road in August 2014, following earlier Cabinet approval to include the site in the wider new council housing build programme. However, in June 2016, the contractor appointed to deliver the scheme advised that they no longer wished to undertake the development. This was prior to work starting on site and has led to a re-appraisal of the development proposals.

With the building contractor withdrawing from the project, the opportunity arose to look again at local housing priorities and the site suitability for a small development of houses. There is a significant need for two-bed family housing, and the Chaloners Road site lends itself well to this.

A controversial planning application to demolish two homes on Tadcaster Road and shoehorn 11 properties onto the site was approved by members of City of York Council’s Area Planning Sub Committee on 9 November. 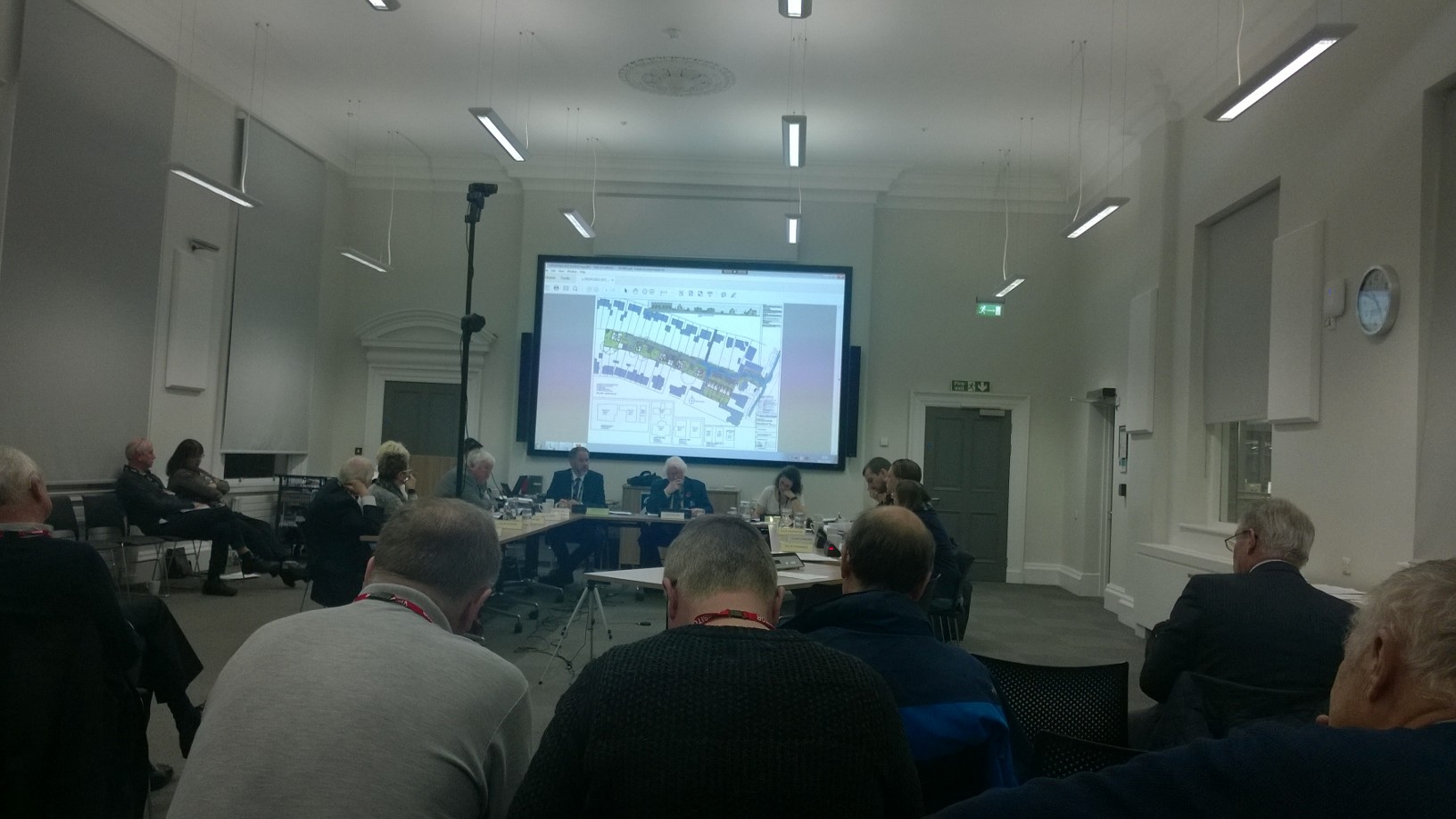 The plans attracted overwhelming opposition from local residents and ward councillors, but officers recommended approval. Cllr Ann Reid spoke at the meeting to highlight the reasons why the application should be refused, one of which was the impact of adding another junction into what is already a very busy stretch of road.

Six members of the committee supported the recommendation to approve the application and four were opposed, so the application was approved. It was agreed however to add as a condition for approval that the narrow track connecting the site to Mayfield Grove should be restricted to pedestrian and cycle use only.

A planning application which proposes the demolition of a bungalow on Mayfield Grove and the construction of three homes on the site was approved by the council’s Area Planning Committee on Thursday 6 July. 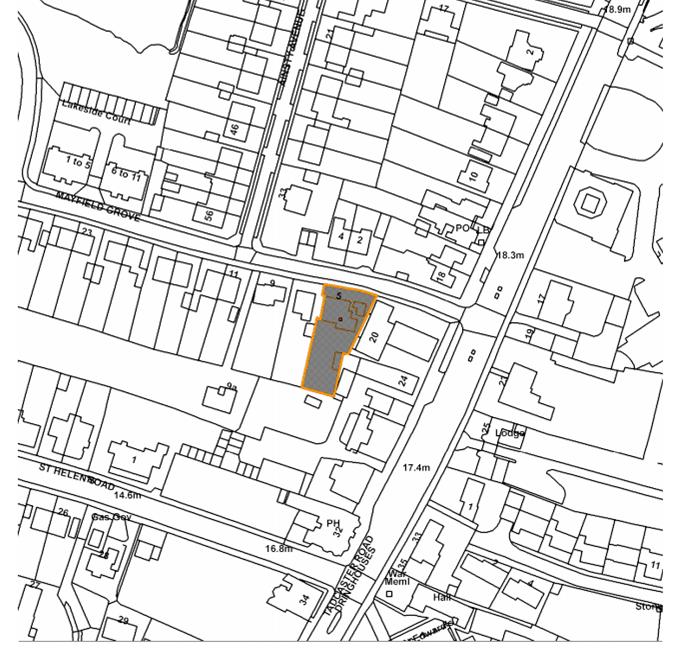 Cllr Ashley Mason spoke at the meeting to express his opposition to the plans on the grounds of over-development and the impact on the local area of a potential increase in on-street parking. Cllr Mason had addressed the planning committee earlier in the year when the application was first presented and was subsequently deferred to enable a bat survey to be undertaken.

A webcast of the 6 July Area Planning Committee meeting is available Here. Cllr Mason speaks 51 minutes into the meeting.

Over 40 local residents attended the drop-in session arranged by the Wilberforce Trust on 6 July at St Leonard’s Hospice.

The Wilberforce Trust plans to build 30 flats for its tenants on land it owns to the north of The Grove, off Tadcaster Road. The Trust is a York-based charity that provides specialist housing and support for people with visual impairments, sensory impairments and other disabilities. 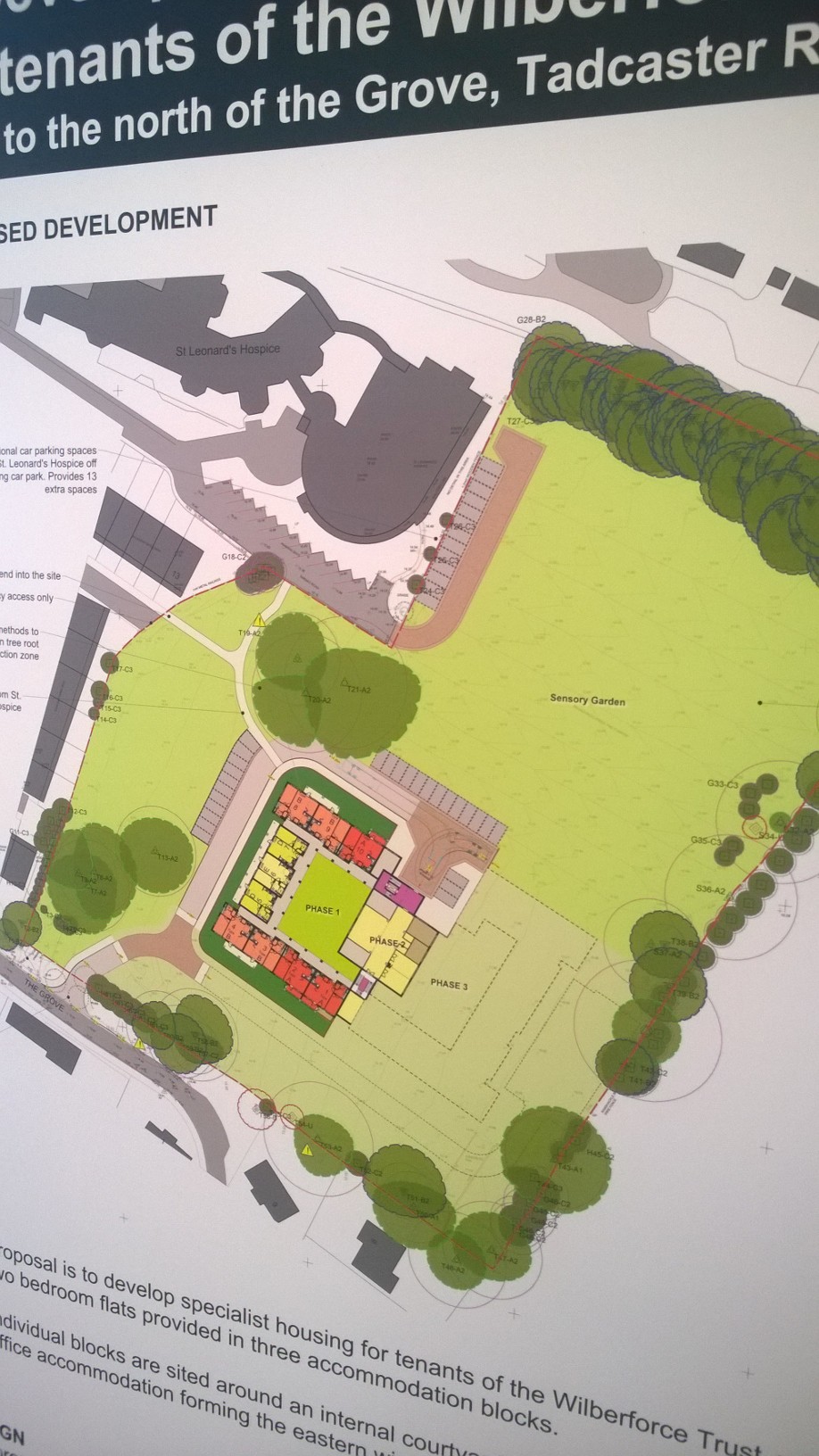 It is anticipated that a planning application will be submitted later this month, with the aim for building work to start in Spring 2018 and completion in mid to late 2019.

Local residents are invited to attend a drop-in session to have their say on proposals by the Wilberforce Trust to build 30 flats for its tenants on land it owns to the north of The Grove, off Tadcaster Road.

The proposals, which include a social/community hub for tenants and offices for the charity, will be on display at the Sunflower Centre at St Leonard’s Hospice on Thursday 6th July from 4.30pm to 8pm. A Wilberforce Trust leaflet (copied below) is being delivered to local homes to publicise the drop-in session. 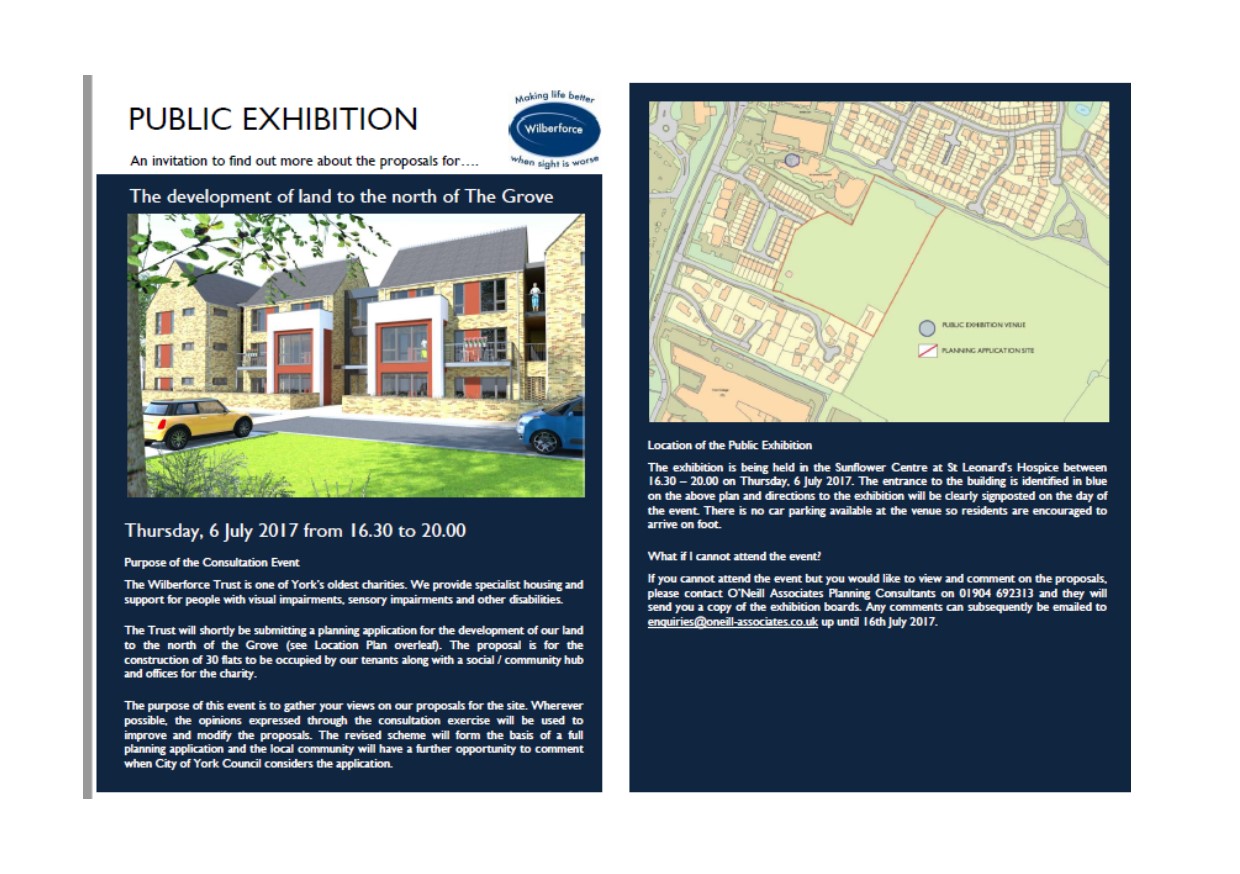 The Wilberforce Trust is a York-based charity that provides specialist housing and support for people with visual impairments, sensory impairments and other disabilities. Its website can be viewed at www.wilberforcetrust.org.uk

In the most recent draft Local Plan, this piece of land had been provisionally allocated for residential extra care facilities in association with the Wilberforce Trust.

There will be a drop-in session on Tuesday 25 April from 3pm to 7pm at St Edwards Church for local residents to learn about a proposal by the Abbeyfield Society Ltd to extend the Abbeyfield extra care home on Regency Mews, off Tadcaster Road. The society has been awarded a Homes & Communities Agency grant to support the provision of a 25 home extension to the scheme. 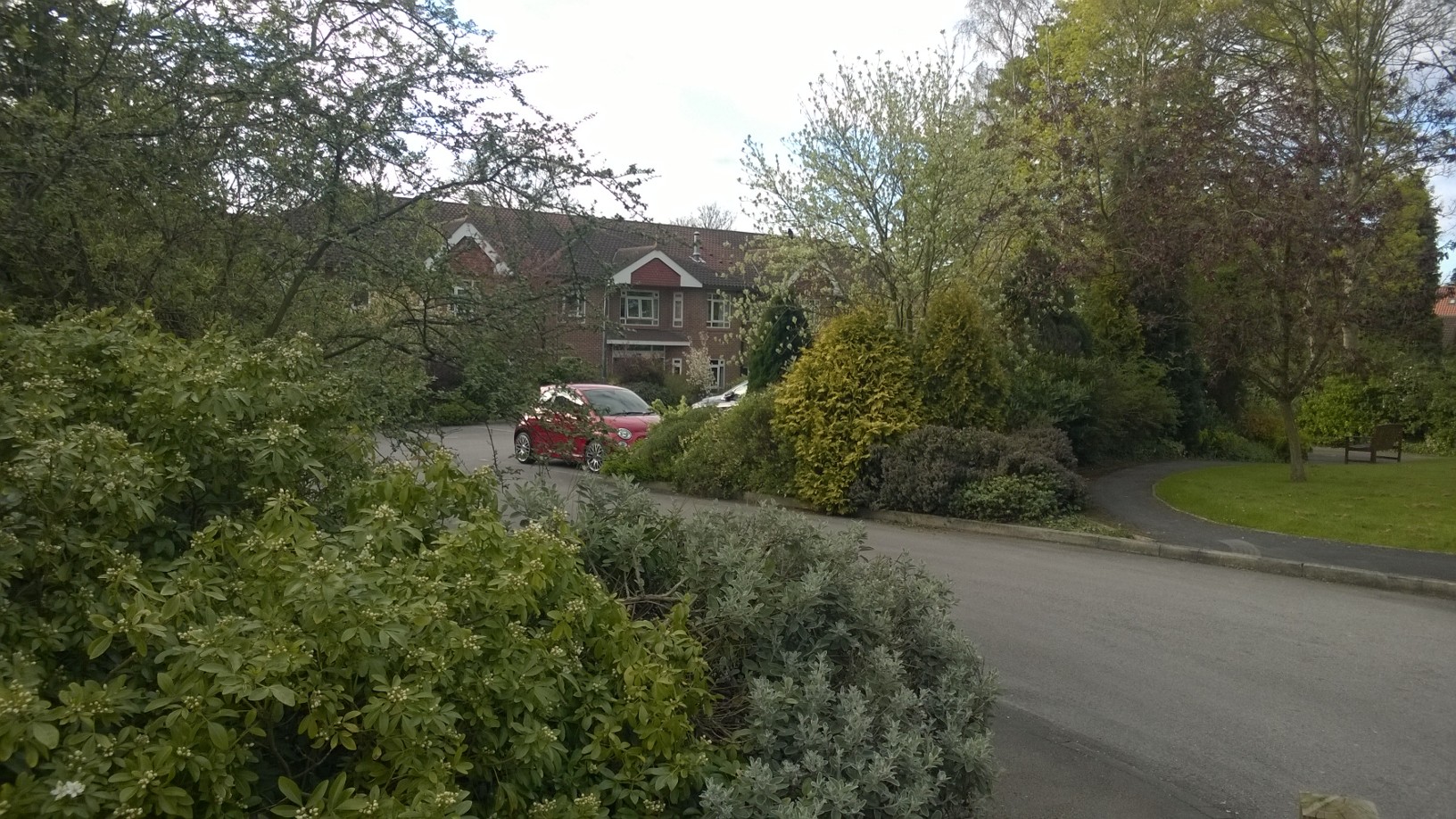 This is a ‘pre-planning’ public engagement aimed at getting feedback before a formal planning application is submitted. Details of the proposals will also be on display at Dringhouses Library and comments invited.