Stephen has secured action to cut back trees that are obscuring street lights on Acomb Wood Drive. 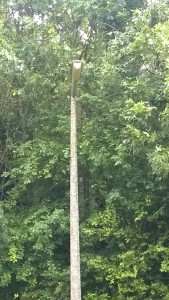 Some trees have been cut back to allow light through 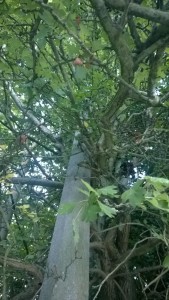 But some lamps remain entirely obscured by branches

Two trees have already been cut back, but others are the responsibility of the Woodland Trust. They Trust have said that they will instruct their estate contractor to trim back the branches in early September.

We will monitor the situation to make sure that this happens.

York Council are planning to dim streetlights between midnight and 6:00am.

Residents, in part of Council Leaders James Alexander’s Holgate ward, were used as guinea pigs in a trial earlier in the year.

In January 2014 the council installed LED lighting in Hamilton Way, Collingwood Avenue, Stewart Road, and Amberley Street in Holgate with several being operated at 50-60 per cent.

The Council Leadership claims that residents did not notice that lights had been dimmed.

Problem is that there was no consultation and residents were kept in the dark (sic) about the trial.

No data on crime levels was reported by the Council who claim that the programme was agreed by the Councils Cabinet on 1st July as part of its (no irony) “rewiring” project.

In reality only passing reference was made to street lighting in a report which ran to over 100 pages.

The Council says, “No comments or complaints were received on the varied levels of lighting throughout the trial”.

Given the flaws in the Councils customer contact system this is hardly surprising. You can’t even report, through the Councils web site, a faulty street lamp let alone a “dim” one.

“Over 1,500 lanterns in York will be replaced this year with a new ‘white light’ – providing a clearer light, which will help make people feel safer at night.

The LED lantern conversions will be installed over a seven month period until January 2015, predominately in the following areas: Rawcliffe, Clifton, Huntington, New Earswick, Copmanthorpe, Bishopthorpe and Micklegate.

The Wards that have been chosen are areas that house the highest number of 35watt low pressure sodium lanterns (orange light).

In addition to the new LEDS, lights will also be reduced by up to 50-60 per cent on streets between midnight and 6am when the traffic flow levels can be described as quiet. Although the level of lighting reduces this is still within current lighting level standards”.

It is certainly possible to make some savings – and reduce carbon emissions – using more energy efficient systems and lighting cycles.

Such a programme was started by the Council as long ago as 2008.

However, the cost/benefit figures – produced by the Council – now do need further analysis

And, of course, street lighting has a major role to play in tacking crime with back lanes and snickets likely to be particular problem areas when we get to dark winter evenings.

The Council has been secretive in its approach and has played fast and loose with resident’s safety.

They should be more open with their plans in the future.