The sessions will take place on Wednesday 2nd June:

The sessions are open to boys and girls aged 5 years and over. Booking is essential with limited availability. For more information and to book go to https://yorkcityknights.com/future-knights/

Parents and carers wanting to keep their children busy and active this summer can click through to a rich listing of fun for the holidays.

The activities, events and ideas on the Shine website are for children and young people, including those with special education needs and disabilities. All have social distancing precautions in place or are based online, and many are free of charge.

Shine, a council-run hub, gives businesses and organisations an opportunity to upload their own events on the website for free.

There is also a section on the site for other sources of information. These include:

The current list features all sorts from a Fairy and Troll trail at Bishopthorpe Pre-school Playgroup to Crazy Golf and Foot Golf at York Golf range, to wildlife watching from The Wildlife Trusts and mindfulness session. The events and activities will be updated throughout the summer.

Organisations or businesses that would like to list an event in Shine, but haven’t yet done so, can list their activity at Get Listed in Shine

Press Reader – the app giving free access to 7,000 online newspapers and magazines – is now live and free to access for anyone with an Explore library card.

Explore was able to buy a subscription to Press Reader with part of the grant awarded last week by City of York Council from the Covid-19 general support grant.

If you don’t have a York Card or a Library Card, you can find out how to sign up online HERE

Here is how to use Press Reader…

More information is available on the Explore website HERE

The Easter break may be a difficult time for some, as many parents and carers continue to care for and educate their children at home.

The council wants to help families through this difficult time, as they stay home to protect the NHS and save lives, so they have pulled together some online resources HERE to get you started.

Incidents of dog fouling in Woodthorpe seem to be on the rise, despite additional litter and dog waste bin having been installed across the ward.

One resident has made their feeling very clear on one snicket footpath.

City of York Council is asking local communities to get involved in tackling the problem. Set out below is a briefing note which sets out details of a project that groups of residents can get involved with. Ward funding would be available to cover the costs of the project.

Aim of the project

To combat the growing incidents of dog fouling around York, to equip stakeholders and members of the public with information to help raise awareness and the means to report incidents and help tackle the problem at a local level.

Why do we want to do this?

There has been an increase in reports of dog fouling to Neighbourhood Enforcement both from members of the public and via Public Realm.

There is insufficient resource to carry out the amount of patrolling necessary to cover all problem areas and offences often take place at unsocial hours when officers will not be available to patrol.

In addition, patrols alone are not the most effective tool to deter people from allowing their dogs to foul; more local ownership of the problem is required – to be the eyes and ears of the community and make the offence socially unacceptable.

Young people in the Westfield and Dringhouses & Woodthorpe wards aged 12 years or older are invited to sign up for a free four-day course which can lead to a Level 1 Sports Leadership qualification.

The course, which for local young people is being funded from ward budgets, will be run by York City FC Foundation from Monday 17th to Thursday 20th February at Foxwood Community Centre.

To find out more or to book a place, call 01904 559508 or e-mail inclusion@yorkcityfcfoundation.co.uk

St James the Deacon Church on Sherringham Drive in Woodthorpe is launching a new toddler group in September.

The free drop-in sessions start on Tuesday 10 September from 11am to 12.30 and will run every Tuesday during term time.

Woodthorpe youngsters are encouraged to come down to the Green on Wednesday 24th July for a kickabout with the York City FC Foundation.

This is the first of a number of sessions that are being funded by the Dringhouses & Woodthorpe and Westfield Ward Committees.

There was a serious break-in at Dringhouses Primary School overnight on Friday 10 / Saturday 11 May. Council officers and the Police are supporting the school leadership team.

There will be communication to parents once there is clarity about the possible impact on use of the school next week.

The school issued the following statement at 12.35pm today: “The safety of the children and the staff is our number one priority and therefore the school will not be open tomorrow (Monday 13th). We will contact Year 6 parents to discuss SATS arrangements shortly.” 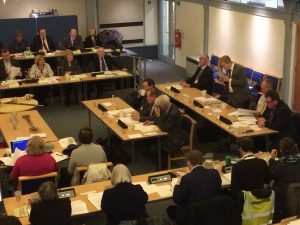 The Liberal Democrat motion on funding for Children and Young People was passed at last night’s meeting of full Council.

The motion, proposed by Cllr Ashley Mason, asked Council to officially recognise the abysmal funding situation of schools in York, both historically and under the incoming schools National Funding Formula.

As a result of the successful motion, the Council will now make contact with the Secretary of State to insist she reconsider York’s position.  In the meantime, the Council will do everything it can to support schools during the difficult implantation period of the National funding Formula.

Furthermore, the motion also recognised the outstanding work of the City’s Youth Council and a commitment was given to explore further funding for the Youth Council.

The motion was passed, with amendments, by every City of York Councillor in attendance, apart from Conservative Councillors, who abstained from the vote and refused to support the sentiments of the motion.

“I am delighted that our motion received such enormous support last night, both from Councillors and members of the public.  The Council can begin in it’s efforts to lobby central Government and stand up for the City’s schools.

Schools are facing considerable financial challenges and under the new National Funding Formula, York will remain the worst funded local authority area in the Country.  This simply is not acceptable and more funding is needed to provide an inclusive education across the City.

It was also excellent to see the efforts staff and Youth Councillors formally recognised by Council. I very much look forward to working with the Executive in identifying financial opportunities to support the Youth Council further

It was extremely disappointing to see that the Conservative Party refused to vote and support this extremely important motion, but nonetheless, the Liberal Democrats will continue to make the case for York and for the City’s schools.