Some of the recycling banks removed from the Askham Bar Tesco car park whilst it is resurfaced have been relocated to the old Park & Ride site.

Two cardboard banks, one paper bank and one plastic bottle bank are now in use at the temporary location.

The recycling banks at the Askham Bar Tesco car park are likely to be out of use for the next two weeks as car park resurfacing work gets underway.

The banks are to be removed by Yorwaste but will be reinstated when the resurfacing work is completed. The work is much-needed, as many sections of tarmac in this corner of the car park have disintegrated and the area was becoming a mudbath.

The resurfacing work has been organised by Tesco.

There are persistent problems with household waste being dumped here, and there is an accumulation of litter around the recycling banks. The popularity of the clothes and shoes recycling banks has also led to bags of donations being dumped next to the full bins. 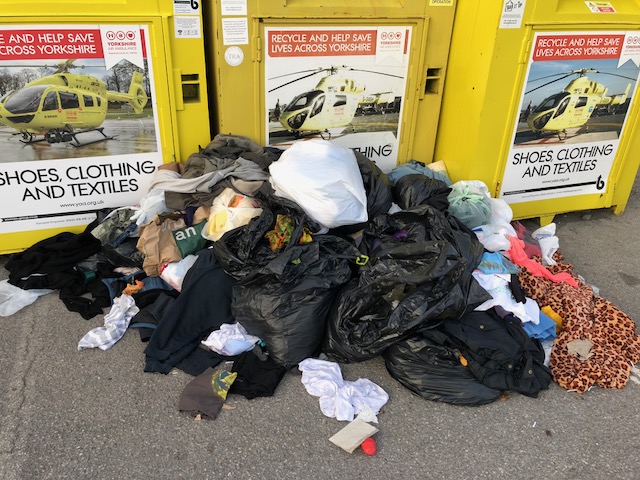 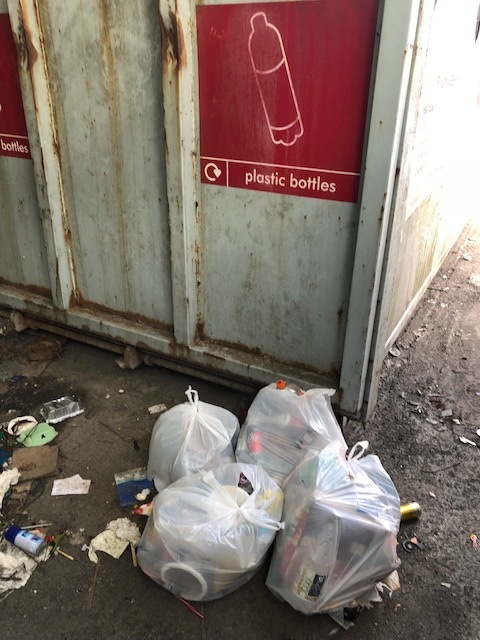 On 20 August Stephen arranged a meeting on site with representatives from Yorwaste, City of York Council and Tesco to discuss the problems and what can be done to improve the situation. Actions arising from the meeting included checking on the frequency of emptying recycling banks which are sometimes overflowing, and exploring options for more proactive enforcement to increase the chances of catching flytippers.

It was noted that the return of the second cardboard bank has helped to improve matters in recent weeks.

Stephen commented  “There are many parties involved in the maintenance and management of this site – for example, a range of different companies are responsible for emptying the variety of banks. It was good to get some of the key players together to discuss the problems and try to come up with a plan.

“It’s important that when flytipping is spotted, the council’s Neighbourhood Enforcement Team is notified via neo@york.gov.uk or tel. 01904 551555. They can then look for evidence which will help to identify the cuplrit.”

Stephen has made contact with two of the companies responsible for emptying the donation banks for Yorkshire Air Ambulance (clothes) and Variety Club (shoes) following a build-up of donations piled up against the bins. 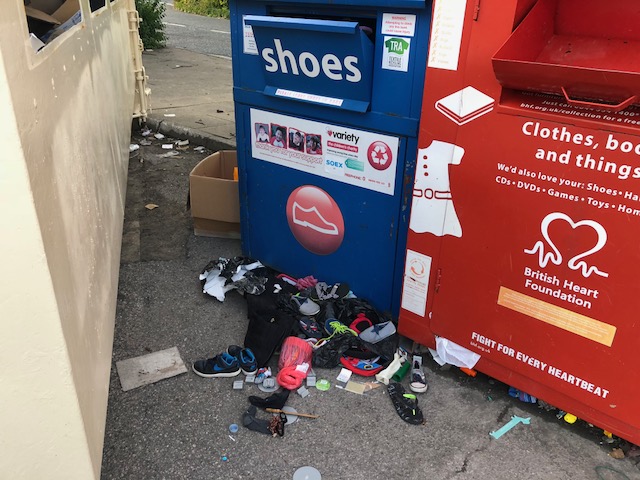 The response from both firms was positive. SOEX UK Ltd, which manages the shoe bank, confirmed that it will take steps to ensure that it is emptied every Tuesday. Bag It Up Ltd, which manages the clothes bank, stated that they are looking into these issues and tweaking schedules to get on top of any sites that have overflow issues.

Stephen said “I’m pleased with the quick response from the firms that look after the clothing and shoe banks, and their commitment to action. If any residents want to donate but find that the banks are full, please take the bags home and do not dump them next to the bins.”

City of York Council’s Recycling Team is helping residents to have a ‘green’ Christmas this year by providing festive dos and don’ts to make it even easier to recycle and re-use Christmas waste.

Greetings cards, wrapping paper and crackers are just some of the items that can be recycled through the council’s household waste and recycling collections.

Councillor Andrew Waller, executive member for environment, said: “Christmas is a time of great joy and celebration for most people, but it’s also a time when we create lots of extra waste. 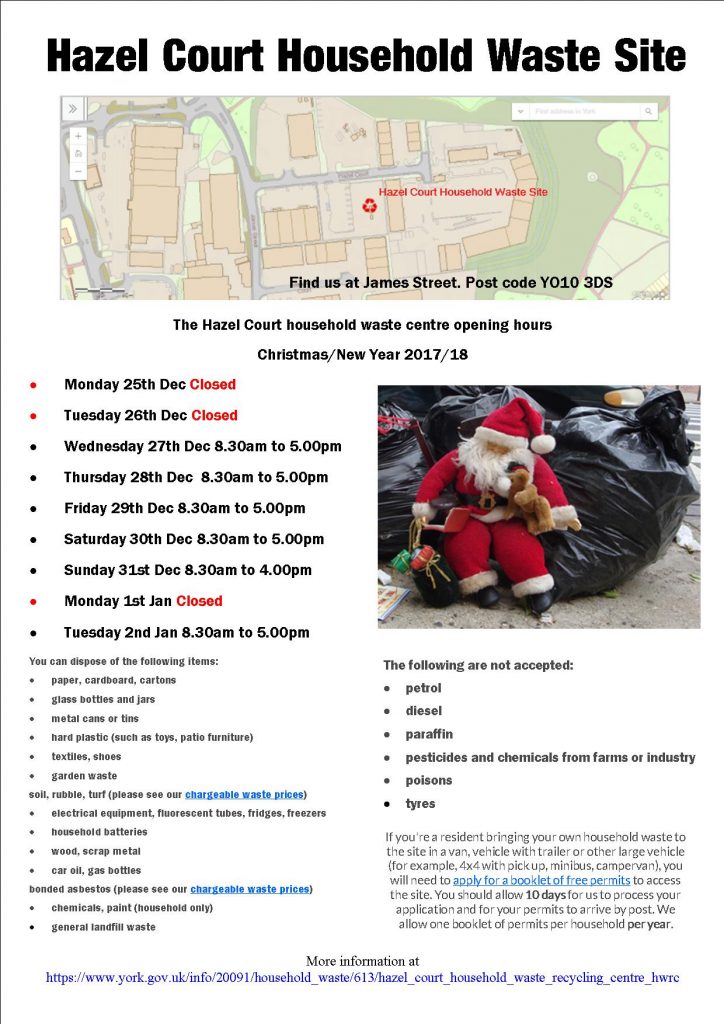 “Just giving a bit of ‘One Planet’ thought to how we can recycle, re-use and compost Christmas waste can make a huge difference to the amount we throw away.

“Re-using items such as wrapping paper and gift bags can also be a great way to help keep costs down next Christmas.”

Festive ‘dos’ to recycle include:

Real Christmas trees and wreaths (with tinsel and decorations removed) can be recycled at Hazel Court or Towthorpe Waste Household Recycling Centres. Lots of food waste can be composted and re-used in the garden. Visit www.getcomposting.com for more information.

For some tasty recipes on using up festive leftovers and hints on how to reduce food waste visit www.lovefoodhatewaste.com

get free alerts to smartphones or tablets by downloading the OnePlanetYork app from itunes or google playstore.

The city’s household waste centres are open every day except Christmas Day, Boxing Day and New Year’s day (with Towthorpe also closed on Wednesdays).  To check what can go in your recycling boxes, visit www.york.gov.uk/waste

For more information on festive waste and recycling visit www.york.gov.uk/festivereycling

All households will get extra household waste collections (grey bins/black sacks) during weeks commencing 18 December 2017 and 2 January 2018… Put your waste out by 7.00am for collection! click  CHECK YOUR COLLECTION DAY/DATES: WWW.YORK.GOV.UK/REFUSELOOKUP 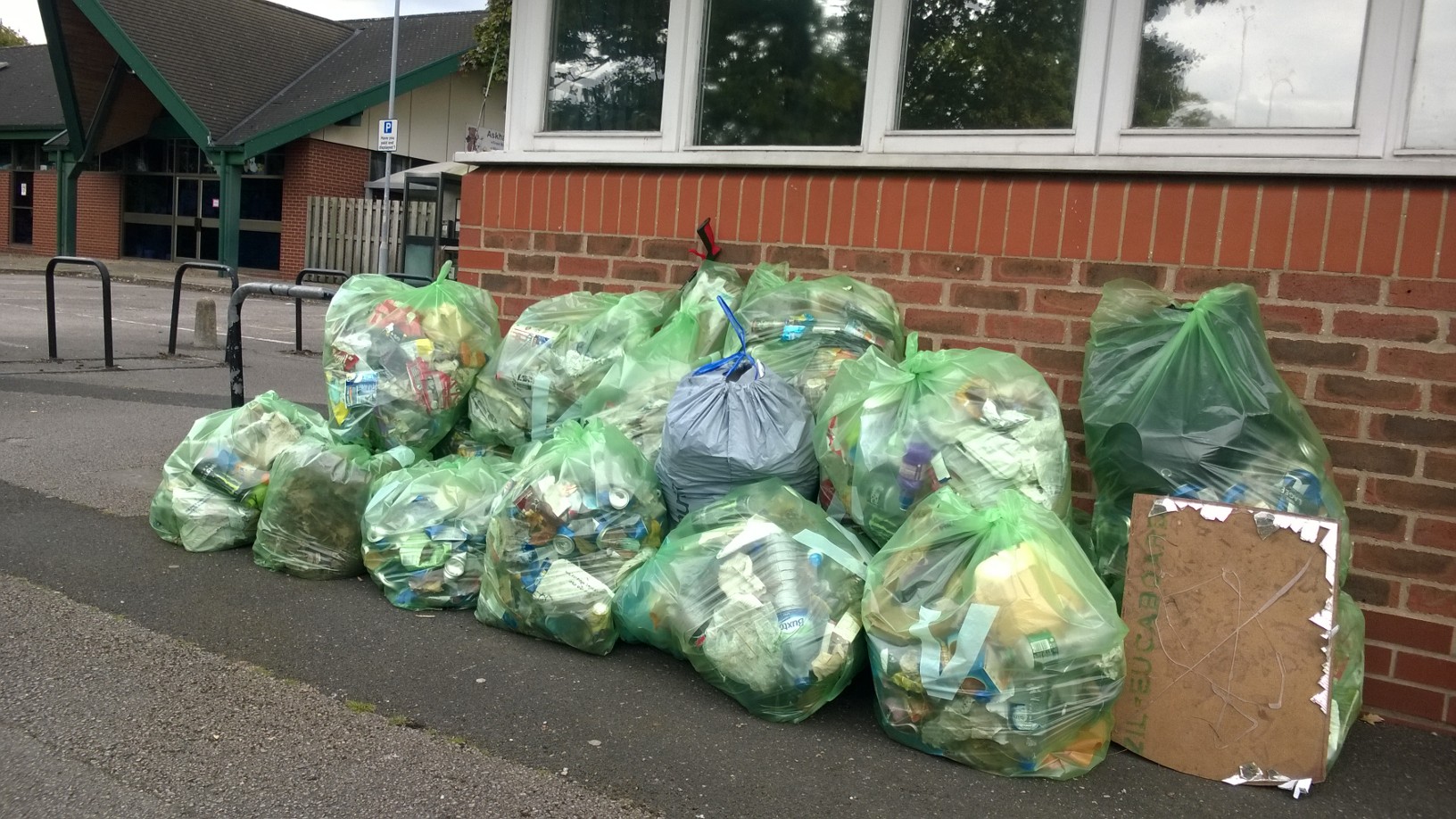 Over 20 bags of rubbish collected at Askham Bar 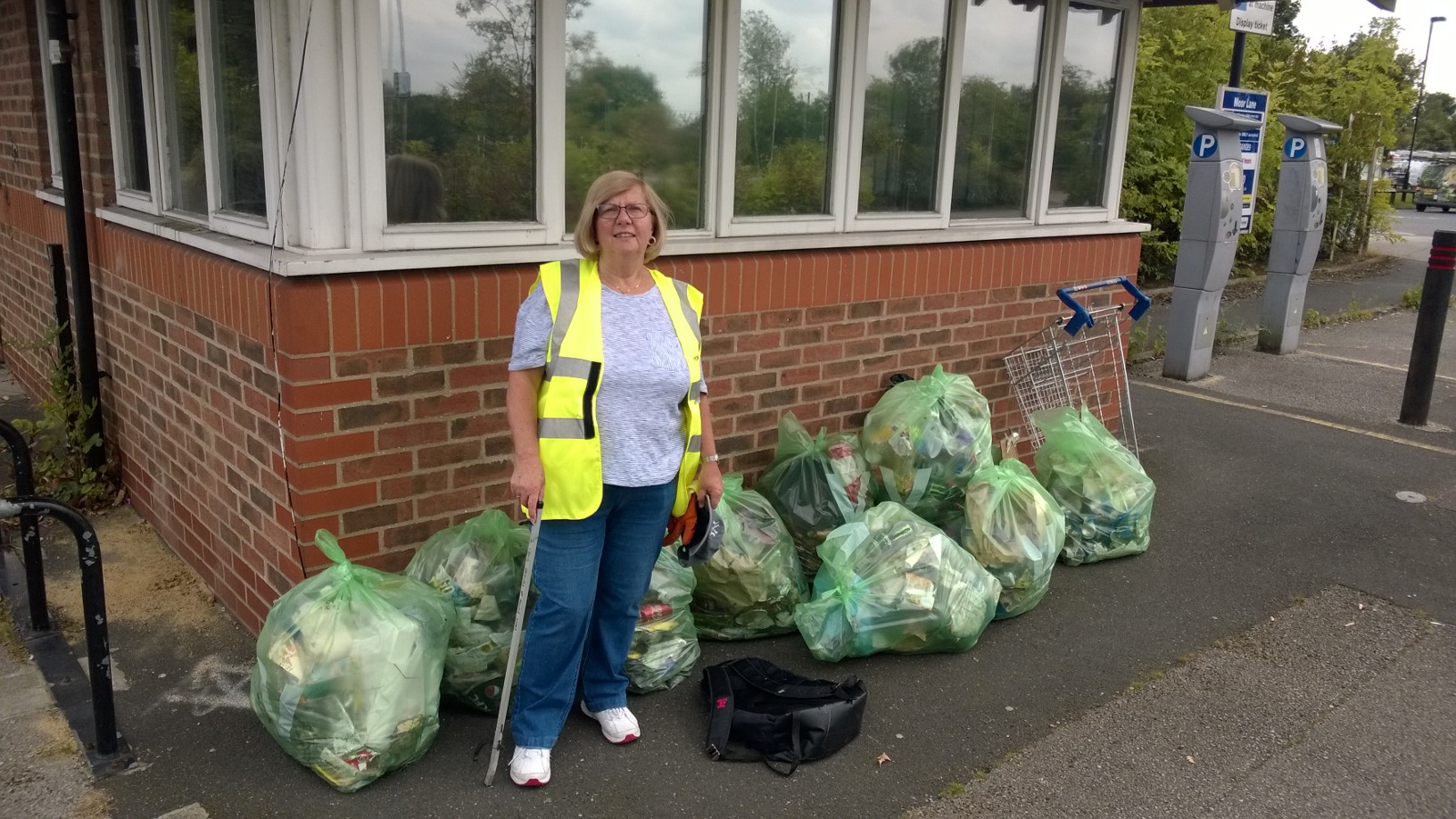 A number of passers by told us that they have recently seen rats in and around the car park, which is concerning but not surprising given the disgusting amount of food waste and packaging that some irresponsible people see fit to dump here. 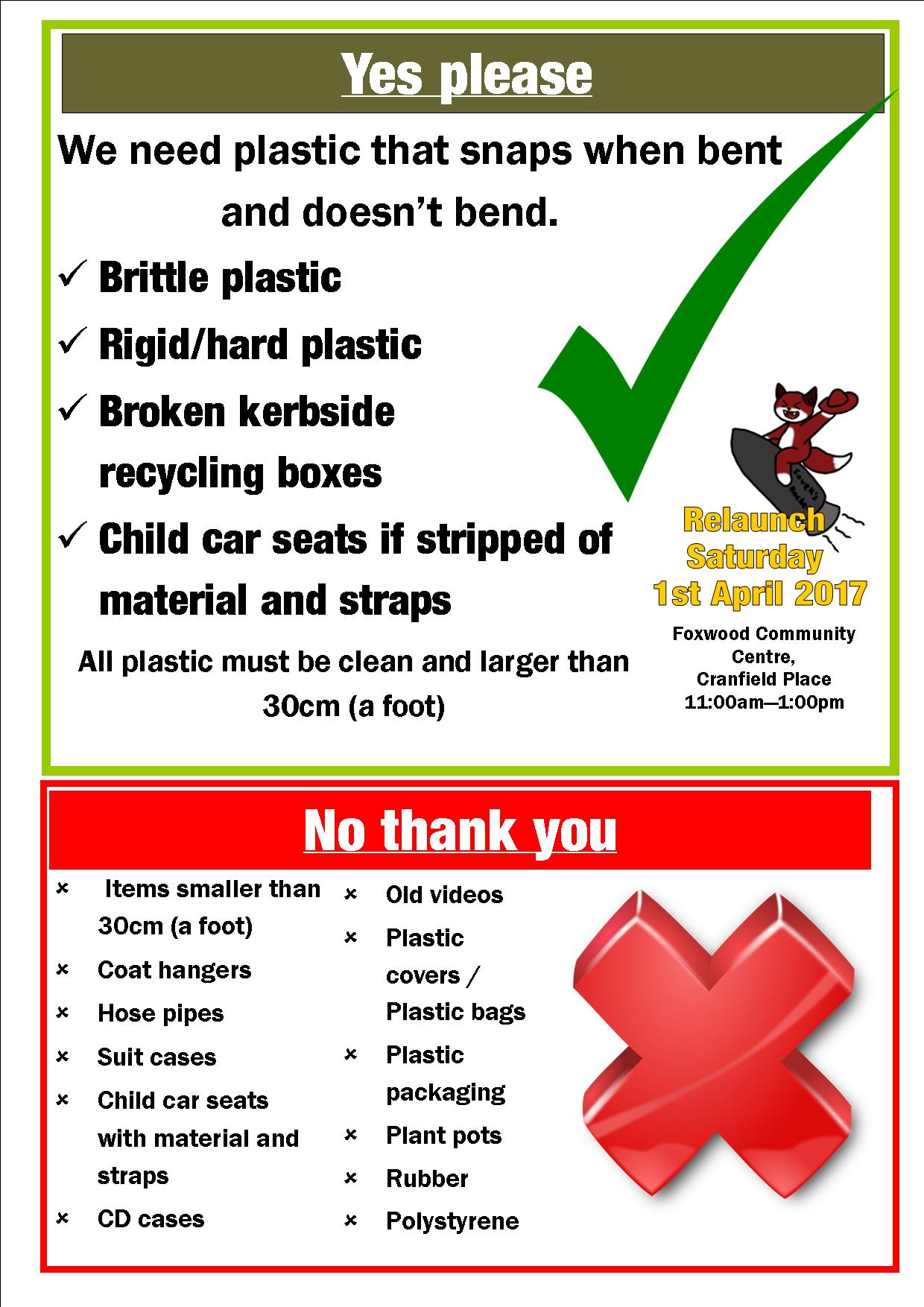 We have been unable to collect the recycling on the following streets:

If you are affected, please leave your recycling out and we will return to collect it by the end of the week.

We are sorry about any inconvenience this may cause

In partnership with Yorwaste Ltd, City of York Council is offering free compost for use on gardens and allotments in York. The compost is produced from the garden waste that is collected from green bins.

The dates, times and location for compost collection are set out on the poster below. 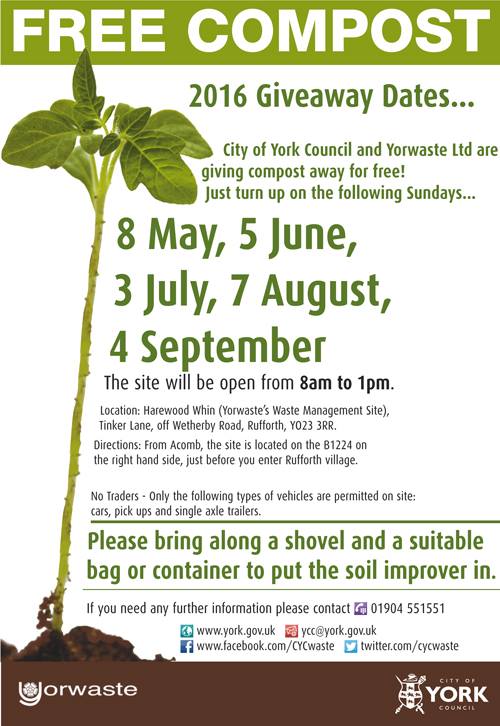