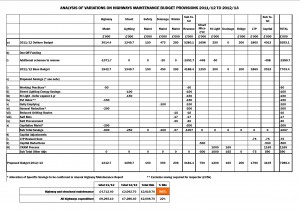 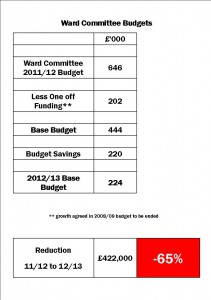 Sad, but not surprising, to see the Labour spin machine at work in The Press. Some of the figures quoted in articles about the Council budget are just plain wrong.

Highways maintence expenditure is reducing by a massive 56%. The effect on the safety of our roads and footpaths will be dramatic

Similarly Ward Committee expenditure – on projects like security patrols, CCTV and improved parking arrangements and which have been prioritised by York Residents – will be reduced by an unprecidented 65%.

Click the calculations right – which have been verified by the Councils professional officers – for details.

The savings are not being used to help the less well off.

They will fund the interest payments on vanity projects like the £20 million borrowing on a “re-energise York” programme as well as the Council Leaders personal £1 million pa “delivery and imnnovation” slush fund.

North Yorkshire Police will be carrying out mobile safety camera enforcement on the following roads between Wednesday 8 February and Tuesday 14 February 2012.

The mobile safety cameras will be in operation at the above sites at various times during the dates stated. Cameras will not be in use on the above routes all day, every day. 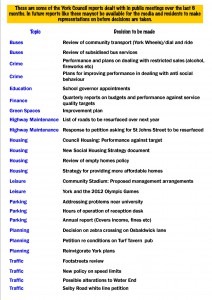 The Council are scrapping the public decision sessions at which Cabinet/Executive members considered policy changes in their departments. The meetings heard representations from other Councillors, interest groups and residents.

They were open to the Press.

Now the Councils Audit and Governance committee is to consider a proposal which would see such decisions taken “informally” behind closed doors with no opportunity for residents to influence what was discussed.

Until recently the decisions were subject to an open debate in what were known as Executive Member Advisory Panels, but these were abolished by Labour.

Now it seems that the first that residents will find out about decisions is when they see work starting in the street.

A similar plan would see the requirement for senior officers to keep a public record of their decisions also abolished.

Now that we know what Labour’s budget proposals are for the City over the next couple of years, we compare here their election manifesto promises with their newly revealed plans. 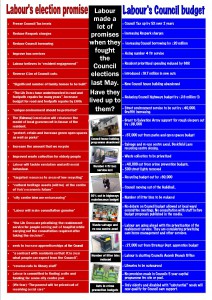 During the recent cold snap we are all grateful for the hard work of the highways department keeping our roads gritted and refilling salt bins. Despite budget restrictions this year most of York’s primary roads have been kept clear of snow.

An interactive map showing salt bin locations and a schedule of gritting operations can be found at www.york.gov.uk/transport/roads/gritting.

If you know of a salt bin that needs refilling please let one of us know and do take care on the ice! 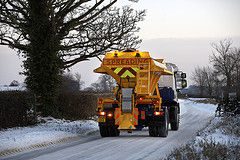 Labour are proposing to reduce the number of streets that are treated with salt. A £10,000 a year budget cut means that fewer areas will see gritters in future, although Labour are not saying which streets will lose the service.

Coming in the wake of a weekend when the existing gritting provision was put under enormous pressure, fears have been raised that the move will lead to more accidents.

The Council also plan to leave salt bins out on the streets for 12 months of the year, prompting fears that they will be vandalised. The bins are normally placed in the Council depot in summer where they are repaired and refurbished.

The new Council budget will allow bins to be filled only 3 times a year in future.

The Council are however finding £500,000 as their share of a £6million plan to extend the Art Gallery

These are some of the services that the Council admits will get worst as a result of the proposed budget cuts.

The biggest cuts are in Highways maintenance 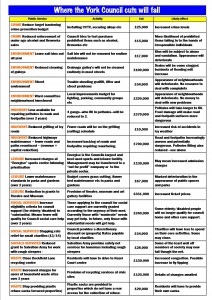 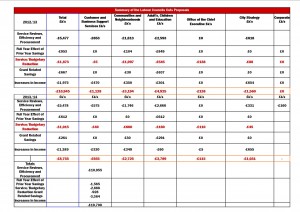 A summary of where public services cuts will be made over the next couple of years has been published by the Council. It reveals the split by department.

It admits that £1.87 million in 2012/13 will come from “service cuts” while claiming that another £5.4 million represents “efficiency savings”.

On close examination many of the “efficiencies” are no such thing. Many are cuts in service standards.

Reproduced below is a list of some of them.

We will publish a list of the cuts that the Council is now admitting to shortly. 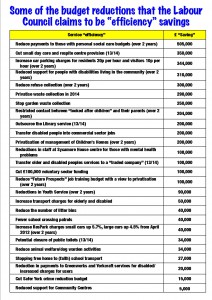 • 8% cut in grants for voluntary sector

• Libraries to be outsourced

• More to pay for increased numbers requiring elderly care and for looked after children
.
• £100k for consultants to prepare a “bus contract” 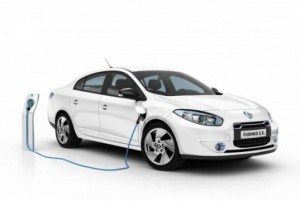 It’s a couple of years now since the York Council agreed to try to reduce the emission levels of public transport vehicles in the City. Top priority was to deal with some types of buses, but taxis and private hire fleets also needed to be modernised.

It a shame that London now seems to be forging ahead of York with this initiative.

For short journeys, electric power is perfectly adequate and better for the environment than even a hybrid. It would be good to see a couple of bays with charging points reserved at the railway station for use by eco cabs. The Council should tender the availability of a couple of licences for a company that was prepared to provide such a option (perhaps in return for a 3 – 5 year contract).

Customers would themselves decide whether to use an eco cab or a conventional taxi.

In the meantime this is what they are doing in London.

“Driving in the city usually isn’t a pleasant experience. Due to the city being the hub for major shopping outlets, businesses, restaurants and etc, traffic tends to be congested and most of the time you end up burning fuel unnecessarily. The good news is if you’re a resident of London, or if you’re planning to take a trip down for the 2012 London Olympics, you might be interested in checking out the Renault Fluence Z.E which will be the city’s first zero-emission cab as part of their plan to go green.

These taxis will be operated by eco cab company ClimateCars who have recently added the Renault Fluence Z.E.s to their fleet. The company has previously offered low carbon/hybrid vehicles in the past, which makes the Fluence Z.E.s the company’s first electric vehicle offering. These cabs will be powered by a 94hp electric motor and will feature a range of 115 miles on a single charge, and to encourage the adoption and usage of electric vehicles, the Renault Fluence Z.E. cab will be charging the same fare as normal cabs in London”.