The latest population projections published by the government show a lower than expected increase in the City’s population in the period up to 2037. 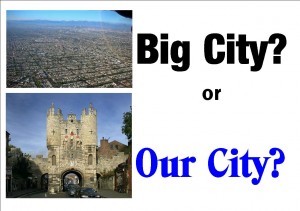 This represents a growth of 19,000 producing an annual average increase of 1266.

This converts into a demand for an additional 575 homes per year (at an average occupancy level of 2.2 persons per home).

This is the figure that the Council used when it published its first Draft Local Plan in February 2011.

This is less than half the figure kicked about by Labour when they issued their projection figures in 2012.  Their “Big City” expansion plans produced outrage across the City and eventually led, in the autumn of last year, to the draft Local Plan being rejected by the newly balanced Council.

The City would be able to identify sites for 600 homes each year on land which already has planning permission and/or which is brownfield (previously developed) land.

There is no justification for building on Green Belt land.

It is unlikely now that a new Draft Local Plan will be agreed before the Council elections take place on May 7th.